I’ve written about the occasional baseball related art available from 20x200 in the past: Don Hammerman’s Baseball Series and the Babe In the Negroe Leagues. They released another piece last fall, In The Ballpark by Tatsuro Kiuchi.

Being the OC type, I ordered it and have grown to appreciate it over the last few months. The picture reminds me of The Loneliness of the Long Distance Runner by Alan Sillitoe: just the solitary outfielder among faceless spectators. Will he catch it for the team or maybe drop it on purpose to spite them? Or, maybe I'm reading too much into it. Regardless, I love the sparseness of the piece. No umpires, no teammates, no billboards!

As with other 20x200 artwork, these come in various sizes - each in a limited edition and signed by the artist. I can't wait to see what they may have for Opening Day 2010!

Posted by IkesCards at 9:45 AM 0 comments Links to this post

This was our third year at the warm up but first as a Father - Son duo. My wife and daughter decided to sit this one out. The event moved down the street to the Hyatt, a change Isaac loved: huge widescreen TV's in the room, "Dad, they have four ESPN's!!!", and way better food. While the location changed, it was still all Cardinals, all the time. As always, I told Isaac we'd stay in the autograph lines as long as he could last. He had to take a break midday, but that was the only break he took all weekend and ended up with autographs from 23 different players!

We started the day with two Cardinal alum's. Isaac didn't have a Reuss card so we picked up this rookie card for a buck before heading to the autograph lines. David Green was supposed to be a killer first baseman. He wasn't... but was a super nice guy to Isaac.

I told Isaac I'd pay for $75 worth of autographs. In the past he has spent that money on cheaper, younger players. Not this year. He knew exactly who he wanted to "buy" and which card to sign for each player. He picked two core Cardinals. This Carpenter card came in a trade with Project '62 from nearly a year ago. He stared at this card at every chance after meeting Carp and getting the auto. Garcia may very well be one of our future core players if he can bounce back from Tommy John surgery this year. Given the Holliday contract and looming Pujols contract, we're going to need plenty of young, cost controlled contributors in the future.

Two more youngsters. We don't know much about Hamilton but Tyler Greene made his debut last year and was a solid contributor and has a chance to make the team this year as a utility player.

The Baby 'Birds just keep coming. Kozma is a nice defensive player but needs to step up the offense. Even then, he may be stuck behind Brendan Ryan and Tyler Green in the future. Ottavino is the next in a long lines of righty starters / middle relievers in our farm system.

Two former Cardinals here. One from my teenage years and the other more recent. To be honest, I don't remember Costello ever playing for the team... at least in the games I watched. Eldred was only with us for a few seasons but stuck around after retiring and can be seen or heard on gameday. He includes reference to the bible in his auto. 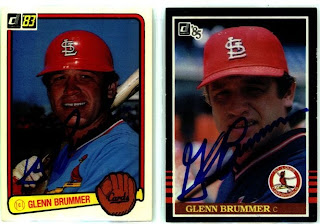 And we end with Glenn Brummer, the man who, without his manager's permission, stole both 3rd and home in the bottom of the 12th inning to beat the Giants on August 22, 1982. The Cardinals would go on to win the World Series later that year.
Posted by IkesCards at 9:10 PM 2 comments Links to this post

Well, its been awhile as Ike lost interest in blogging / trading but we just attended the Cardinals Winter Warm Up last weekend and he's excited to post the autographs he got this year. More to follow!
Posted by IkesCards at 4:59 PM 2 comments Links to this post