Day Two was just as crazy as the first. If anything the lines were even longer from the start. We only had one pay auto so we started off with the youngsters.

Lance Lynn is yet another 4th or 5th starter type at Memphis. But to his credit, Lynn moved quickly up the ranks last year and while not spectacular, he apparently has great control and manages to get people out. Shane Robinson follows in the Mighty Mite footsteps of Aaron Miles... plus he wears cool socks. How great is that pic on the Springfield Cardinals card (below)?

Mitch Boggs has been wearing out I-55 the last couple of years but did a nice job over an extended stay last summer. He's in the hunt for the 5th starter slot this year. Super nice guy and Isaac was excited to get a chrome card auto'd.

P.J. Walters, like Lynn and Boggs, is another back-end starter type. Josh Kinney was a key piece in the 2006 playoff & World Series bullpen who's been trying to make a comeback. We wish him well. We close this page with one from *my* younger years, Ken Dayley. Dayley was lights out in the 1985 bullpen by committee. One of the few second guesses in Whitey Herzog's career might be pulling Dayley early agains the Royals in the World Series.

We had a chance to get Colby Rasmus' autograph for free during last summer's All Star festivities but Isaac sister had had enough that day. We had to pay for it this time, but it was still reasonable (and goes to charity). Seconds after pulling this Chrome X-Fractor last fall, Isaac declared he would get it autographed. And he did. Isaac knows Andy Benes as Fredbird's sidekick on the Cardinals weekly kids program. Now he thinks he makes cool B's on his autograph.

Descalso may well become another in the long line of cheap, cost controlled middle infielders who field well and tasked not to hurt the team at the plate. With Skip's two year deal done and with Tyler Greene ahead of him on the depth charts, Descalso may be an injury plug-in at best this year. Scherer is a career AAA-er in his late 20's. Not sure he's ever been to the show. 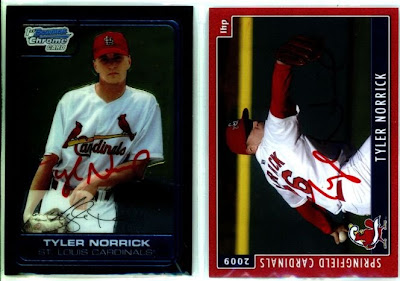 And we end with Tyler Norrick. I really like the Springfield Cardinals set. They even had an "insert" set of Rehabbing Cardinals from the big club (Lohse, Glaus, etc...).
That's it until next year. I promised Isaac I'd take the Monday off in 2011 and make it a three day weekend.
Posted by IkesCards at 10:00 AM