Side By Side Auto's: Jaime Garcia

We were at Garcia's first Major League start two summers ago. Unfortunately, we haven't see him since. He apparently pitched with pain in 2008 without telling the coaching staff and ended up needing Tommy John surgery that fall. Brilliant. He rehabbed last spring and started for Memphis down the stretch, helping the AAA affiliate to a league crown. He's a long shot for the Cardinals 5th starter, even though he brings a much needed lefty to the rotation. I suspect that he'll be in Memphis at the start of the season to strengthen his arm and have spot start duties through mid-year. If he's as good as he was last fall for Memphis, he'll join the Cards for the stretch run.

As far as the auto's go, the top two Winter Warm Up signatures seem a bit lazy... J - squiggle G - squiggle. He more than makes up for it with his Big League uniform inscription of 64 though! That was his number in 2008. The current roster lists him as number 54 now. 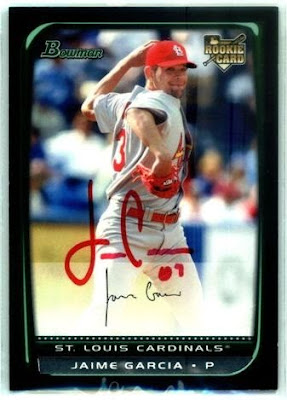 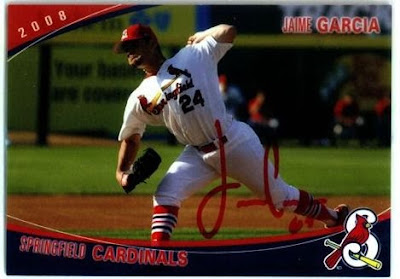 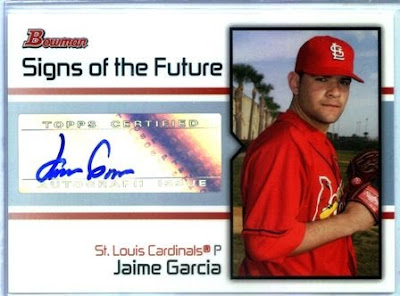 Posted by IkesCards at 7:53 AM

Labels: Autograph, Jaime Garcia, Side by Side, St. Louis Cardinals