Here’s one we’ve never seen before. I took Isaac to an out of the way hobby shop over the weekend and ended up buying a few packs for him, two of which were of last year’s T206. The first pack was uneventful but the second pack had a giant gap between the top and bottom cards which turned out to be this: 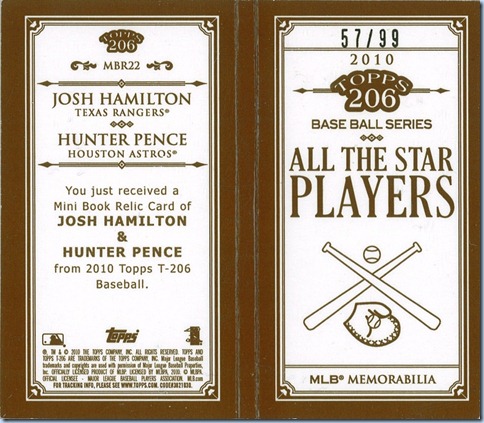 Pretty cool mini-book dual relic card numbered to 99, especially since Hamilton has a few pages in Isaac’s favorite player binder. But it gets better: 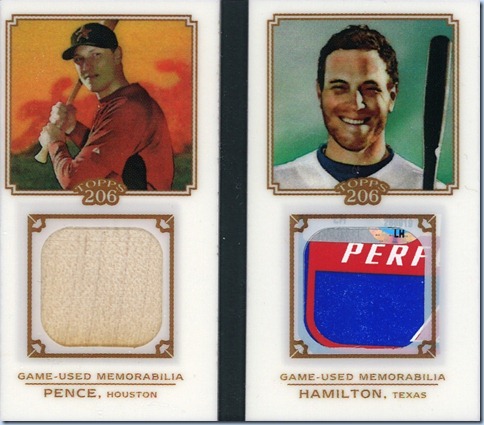 The Pence bat is pretty blah but how about that Hamilton swatch? We weren’t sure what it was but figured out pretty quickly that it’s the lower label on the front of Hamilton’s jersey. Isaac thinks it might be worth more than a typical mini book relic from this set (about $20 based on recent ebay transactions) because it’s more unique than a plain jersey swatch. If he’s right, he’s thinking about flipping it – if not, it already has a spot with his other favorite player cards.
Posted by IkesCards at 12:17 PM

First off that is a great pull. You are right that it's even better that the Hamilton jersey is different. My guess is that the card would carry a premium since it isn't just a plain white swatch.

Wow, that's an amazing pull. As an Astros fan, I started drooling as soon as the picture came up... that Hamilton swatch should get you a premium price should you choose to sell it... although if you'd like to trade it... I'd be more than willing to try and put an offer together... ;)

Thanks guys! The little guy still hasn't decided what to do with this one. Its almost too cool to let go!