This was our second trip to the Warm-Up. Last year, we paid for five tickets and walked away with five autos. This year, I told Isaac I would stand in any complimentary auto line he wanted to thinking he wouldn’t last very long. Little did I know…

This year, we decided to bring a small plastic box of cards instead of balls. We did have one player we could not find a card for so we brought an extra mini-bat from last year. Now, I’ve never asked for an autograph and don’t have a clue about the best method or pen or card to use; I quickly learned at our first stop:

Joe Mather, or Joey Bombs as the local media and fans call him, is Isaac’s favorite player. How could he not be? We witnessed his big league debut at Busch last year. Diving catch in right field to save a hit and possible run? Check. Hit in first AB? Check. Super nice guy? You bet. I had read about rubbing chrome cards for Sharpie’s to “stick”… I didn’t realize I had to rub down nearly all modern cards, chrome or note. Shame, since Isaac loves the gold parallel. Never again.

Brian Barton is another player Isaac loves to watch. We had a season ticket package last year. Our first game: Barton scored from first on a routine double in the gap. Being a good base runner is one thing, having the ability to out run a throw is another. Barton out ran the relay. Isaac was hooked.

Chris Perez is the Cardinals closer in waiting. Bryan Anderson caught him last year. Perez has nasty stuff but can’t control is slider. Anderson is stuck behind Molina and is constantly mentioned in trade talks.

Brett Wallace was the Cardinals #1 draft pick last summer and has had an amazing run in the minors since. Despite owning the weekends laziest signature, we’re excited to see him in the bigs. He is the heir apparent to Glaus at third. Stavinoha spent time between Memphis and St. Louis last year as the outfield injuries mounted. OF/1B type in an organization with a future HOF at first and an absolute log jam in the OF. Don’t know much about Jay but he's a non-roster invitee to spring training. Guess we'll find out... 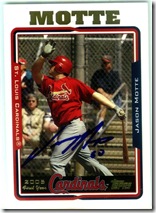 Jason Motte, a converted catcher, has supplanted Chris Perez as Isaac’s favorite young reliever. Why? 98 – 102 mph. Isaac’s eyes lit up when he saw the stadium radar gun flash 100+ mph fastballs. He needs a second pitch but man is he exciting to watch.

Posted by IkesCards at 5:45 PM

Sweet - you got Crabman's autograph! I really like the red ink on that Chris Perez Stadium Club card. Looks great for a Cardinals player! I'm surprised that the ink stayed better on that card than the Topps Gold card.

Yeah. I rubbed down every card after the Mather fiasco. Funny thing about Crabman... he's literally the smartest man in MLB: Aeronautical Engineer going for Masters or PHD in the off season. St. Louis area teachers love the guy and hold him up as a true scholar athlete.