We surprised Isaac with the first of seven games under our modest season ticket package last Sunday, April 12. It was part of the Cardinals week long Opening Day festivities with a special slant for the younger fans. Fans 15 years old or younger received a regular sized Ryan Ludwick “Big Stick” bat and were invited to run the bases after the game. Surprisingly, they handed the bats out BEFORE the game and not afterwards. Good thing that Loshe pitched a three hitter and there were no bad calls. Can you imagine hundreds of bats being thrown onto the field after a bad call? Yikes!

The Bat. DVD included as a frame of reference for actual size… and as a symbol of what might be in 2009. 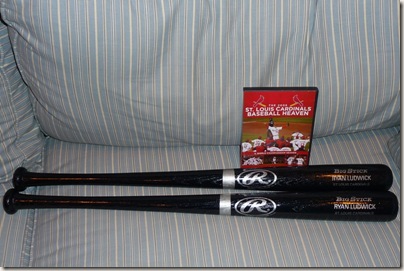 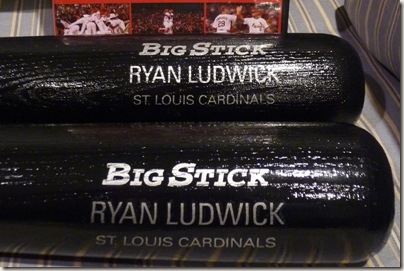 The view the Clydesdales have as they trot onto the field in the right field corner. 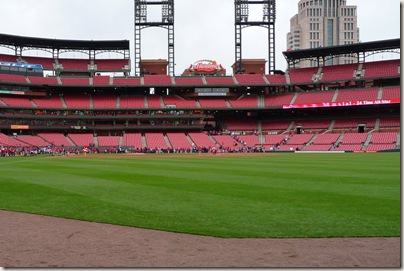 Isaac’s little sister as she high five’s Fredbird at first base. That’s Isaac’s hand on the left. 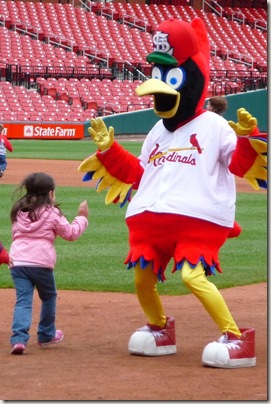 Scoreboard. I didn’t get a good shot of it but MLB parks are displaying the player picture and stats on the scoreboard using the Topps flagship design just like last year. 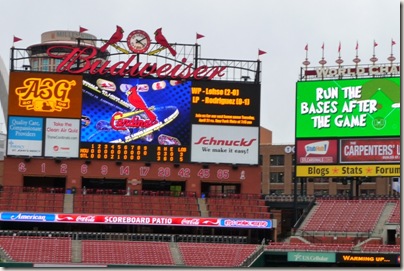 Our seats are in the right field corner, field level, right at the fair pole: two seats in foul territory, two seats in fair territory. Here’s the reverse view of everyone’s favorite Pujols baseball card picture. This was taken in the first inning. Matsui singled on the first pitch of the game. He would be the Astro’s only base runner until the 9th inning. Absent that hit, Loshe would have had a perfect game going into the Ninth! 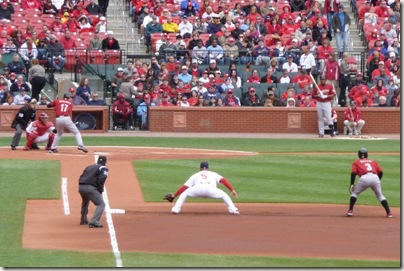 Posted by IkesCards at 1:03 PM 0 comments Links to this post

Unlike the first series (I do not have the second and cannot comment on it), this series focuses exclusively on baseball subjects. Players and managers from the Negro Leagues, the Majors, and Japan, among others, are featured in the set. Sorry for the fuzzy thumbnails - they're not resizing correctly in blogger. Click on each image for the larger high resolution scan. 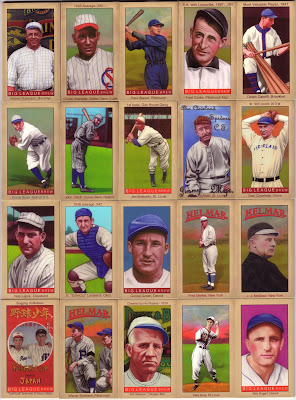 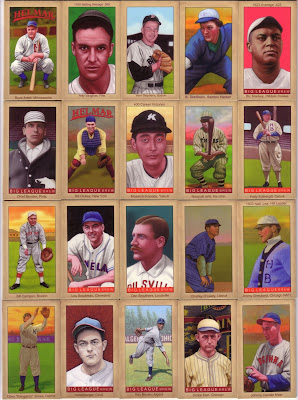 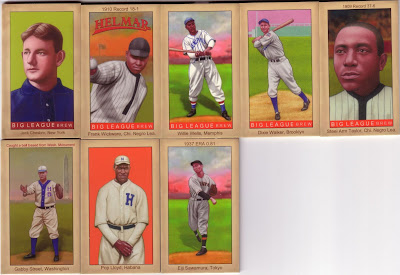 Posted by IkesCards at 9:35 AM 0 comments Links to this post

I finally had a chance to open the box of Helmar Series 3 cards last week. As in my posts about Helmar Series 1 (here and here), I’ll follow up this St. Louis centric post with one displaying the entire set.

While the first series was available in packs, Series 2 (release in 2006) and 3 (2008) were only available as complete sets with Series 2 being short printed by comparison. I’m trying to track down a Series 2 set now that I have the others. Unlike the first series, this one focuses exclusively on baseball. 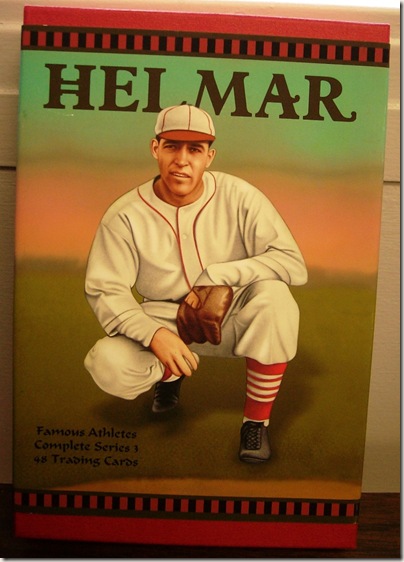 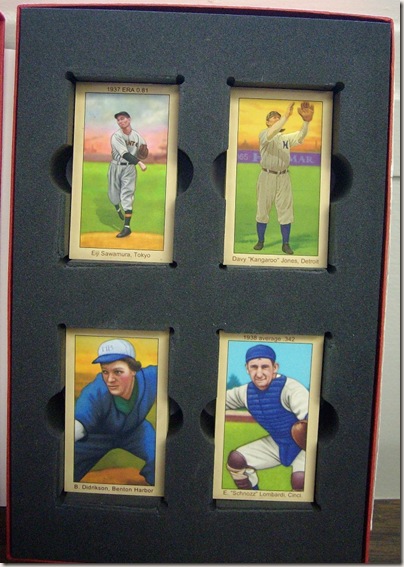 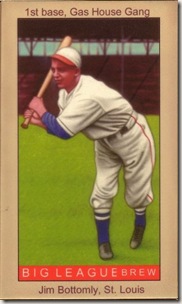 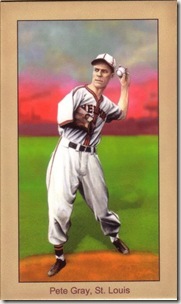 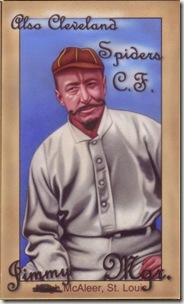 Nice to see the folks at Helmar have a sense of humor. They’ve included a “corrected” card for an error from the first series.

I've posted about his baseball photographs before: http://ikescards.blogspot.com/2009/02/don-hamerman-found-baseballs.html and his work graces the cover of Ron Darling's new book: http://www.20x200.com/blog/2009/04/catching-up-with-don-hammerman.html

Hurry! These are limited production and go VERY quickly. It looks like 20x200 recognized Hamerman's images and extended production to 720 copies between the three sizes instead of the usual 222. Don't let that fool you though. The small sizes have sold out in a matter of hours when his other editions went live.

Just bought mine... and to top it all off just got free tickets to tonight's Cardinal game!

Disclaimer: I am in no way affiliated with 20x200 aside from being a huge fan of their concept and offerings. I also cannot guarantee free MLB tickets will magically appear should you purchase either or both of these prints.
Posted by IkesCards at 11:04 AM 0 comments Links to this post

Not a big sticker guy. Isaac likes to slip them into the binder sleeves so he knows which binders are for his Cardinal cards. These are a few that haven’t made it onto a binder yet. 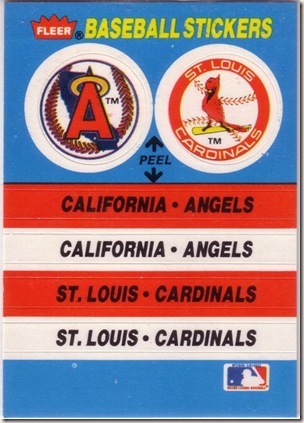 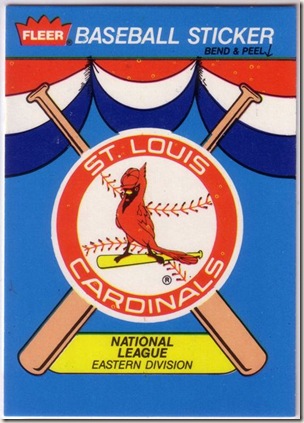 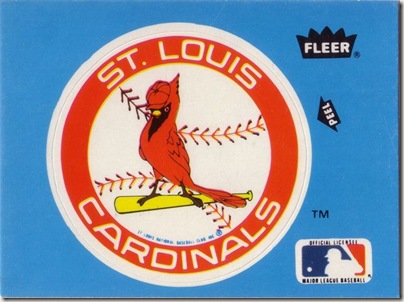 Posted by IkesCards at 7:53 AM 0 comments Links to this post 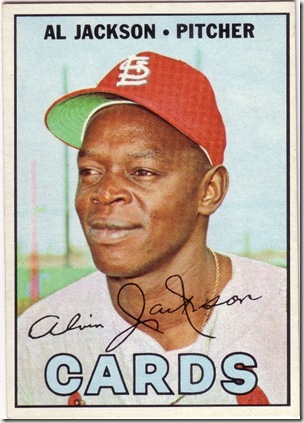 #226 Julian Javier – I watched the ‘67 Series between the Cards and Red Sox on MLBTV last month. Hard to believe this slight hitting infielder hit a three run homer in game seven of the series to help win it. One of his sons or grandsons practices medicine in a local St. Louis hospital. 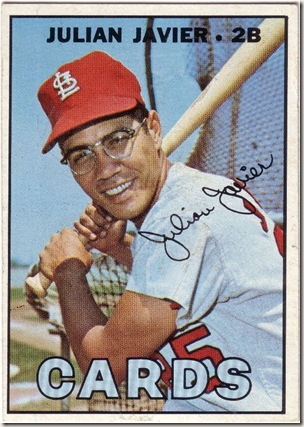 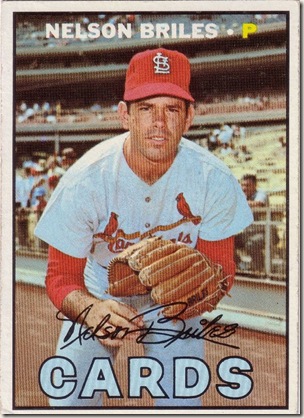 Posted by IkesCards at 7:30 AM 0 comments Links to this post 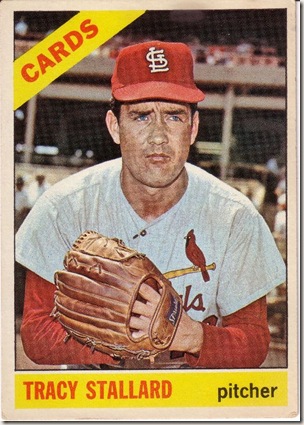 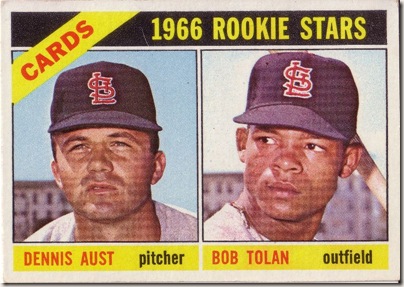 #28 – Barney Schultz. Barney, a knuckle-baller, pitched in a then record 9 consecutive games in 1962. He pitched in four games of the Cardinals 1964 World Series victory over the Yankees. 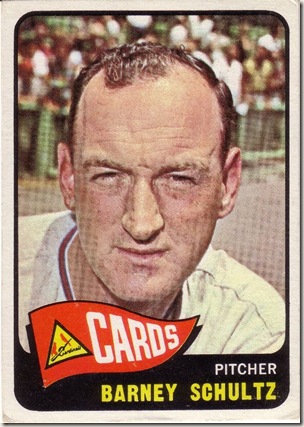 Posted by IkesCards at 9:00 AM 0 comments Links to this post