Day two began with breakfast at the 4th Street Grill at the Millennium Hotel, site of the Warm-Up. I mention this b/c we bought 20 fifty cent scratch off tickets to win an autograph ticket for Rick Ankiel, Skip Schumaker, or Ryan Ludwick. In actuality, we bought the tickets for Ankiel; Isaac met Skip last year and we already had a ticket for Ludwick. My wife and I told Isaac that the odds of winning were small, that thousands of tickets had been printed with very few winners, that this was not like playing Yahtzee and his luck may run out, AND that we were NOT going to keep buying tickets until he won. With expectations properly deflated, my wife took my daughter to the buffet line while Isaac scratched off the tickets. Halfway through the stack he uncovered “WINNER.” Scratching below to reveal “ANKIEL.” We played the “What was your favorite part of Winter Warm-Up?” game during our drive home. I told him it was seeing his face after he won a ticket to meet one of his favorite players.

Hawksworth has a chance to make the club as a spot starter / middle reliever. Ankiel is Ankiel. I saw him pitch in the playoffs against the Braves. We were in the stands his first game back where he homered to deep right; one of the few times I’ve seen Tony LaRussa lose his composure and openly celebrate a players accomplishments. Parisi has a better chance than Hawksworth to make the club, having pitched in the majors last year as injuries depleted our pitching staff. Ankiel & Parisi probably spent the most time chatting with each fan, taking time to personalize the experience. Parisi gave Isaac two fist bumps. He’s been fist bumping ever since. 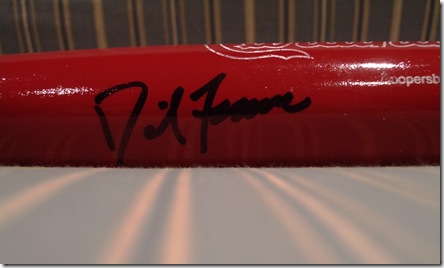 We could not find a David Freese card before the show and brought this red mini-bat along just in case. No cards in the vendor area either so glad we had the bat. Freese seemed like an after thought in the Edmonds trade to the Padres, worked his way into a bona fide big league 3B, and found his way a rung lower on the depth chart behind Wallace by the end of the season.

Glad Ludwick is back this year. Super nice guy who deserves the accolades (not to mention the pending arbitration pay out). He was one of the few players to thank us for coming out for the cause. The Worrell card revealed Isaac’s card collecting mindset. He had tons of cards to choose from: ROY, All Star, League Leaders, etc… but he picked this one. Why? “Because mini’s are cool, Dad!” Did I mention he’s six? Worrell, to his credit, stayed an hour over his scheduled signing time to meet the fan demand and was friendly and pleasant for us stragglers.. Barden is an aging infield prospect who played well in the Summer Games if I recall correctly. Given the Cardinals infield issues and the absence of Barden’s name in the equation, sounds like he’ll be a utility guy at best.

Isaac found this card in a flea market binder last fall, recognized him on the MLB network promos, and bolted for his station before heading to our next paid auto. To honor Joe’s regal status, Isaac opted for a silver Sharpie. Kyle McClellan is another of Isaac’s favorites. He’s a local product who made the club last spring and was one of our more consistent relievers for the first 4 months of the season. Isaac gravitates towards the young players. I asked why given, at the time, the team was loaded with Pujols, Edmonds, Rolen, Eckstein, etc… “Because they’re like me, Dad. They’re kids…” Horton is not a kid, I remember watching him while I was in grade school. He is currently a Cardinals TV & Radio announcer / personality.

All in all, Isaac was on a mission: twenty player autographs in two days. I was surprised he lasted so long on both days: we nearly closed the place Saturday and were third from last on Sunday. Of all the cards he brought, we missed Ken Reitz and Bob Forsch. Its a three day event but we did not go on Monday. Instead, I offered to take him to meet Cardinal HOF-er Orlando Cepeda next month. I extended my offer for next year’s Warm-Up: I told Isaac I would take him all three days for as long as he wants to stand in line. That should give him plenty of time to find more Cardinals cards, not to mention mini’s.

Posted by IkesCards at 8:46 AM

Thanks for sharing this awesome experience! I hope that my future kids become as interested in baseball as Isaac. Great stories about the players too. I might have to root for the Cardinals in the NL this year. The Ankiel and Ludwick autographs are especially great!