An interesting story showing how baseball can work itself into our daily lives, seeping into our subconscious, and briefly weaving through the lives of three strangers.

Early last fall, I discovered the work of Mark Penxa, specifically his series depicting images inspired by baseball: Stealing Signs, Dead-ball Era Baseball, Memories From My Last Life; 1927. I remember viewing the collection online, noting which of the 100 images depicted St. Louis Cardinals & Browns, and asking my wife which I should order for my office or Isaac’s room. And then, of course, I completely forgot to order. Actually, I forgot about the works entirely, blissfully unaware that the images were quickly selling out: these were all 1/1’s.

Fast forward to last week. I signed Isaac up for a 2008 Heroes Box at Jawdys Basement hoping for the Cardinals, or at least cards he can trade for Cardinals. What we got was so much more. After a lackluster break (just Mets colored parallels), we received two offers for “shared” hits: Dave at Fielder’s Choice offered to give us the shared hit outright while Ernest at Blue Heaven offered the shared hit for a small trade. One thing leading to another, we settled on another side trade: his Cardinals for our Dodgers. More on that later… noting only that Ernest mentioned a Grover Alexander card he was sending our way.

I flew to Guadalajara on Monday, an adventure in and of itself: late connections, arriving at my gate at O'Hare while the doors were literally closing, and discovering my bags had not made it with me to Mexico. After the Monday chaos, a full workload on Tuesday, and a night of Paloma’s waiting for me Tuesday evening, something triggered memories of Stealing Signs that afternoon. I grabbed my Blackberry, eventually found Mark’s site, and after a few technical difficulties, inquired about a piece I wanted all those months ago: Untitled #003: 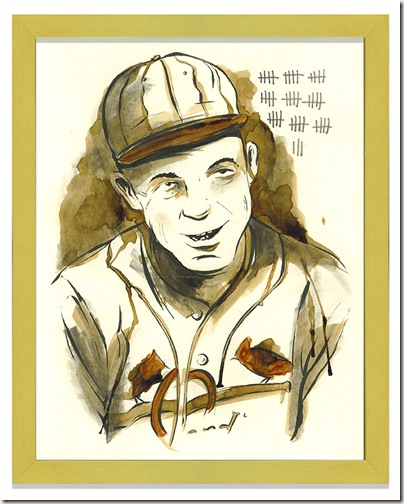 Amazingly, the piece was still available and I pestered Mark for payment information to ensure I would be the eventual owner. Unbeknownst to me, Mark had recently learned of a close friend’s death and I felt horrible for my “just making sure you got my message” email. I apologized as clumsily through email as I would have in person. Mark assured me it was no trouble and actually shared a few details of his loss. It turns out the gentleman who inspired Stealing Signs passed away earlier on Tuesday: I asked about 003 a few hours later. He thought it was great that someone asked about the series on the day of his passing, asked to re-enable the web presentation, and purchased a print from the series.

Emboldened by coincidence, I asked who, if anyone, was depicted in 003. I did a quick check on baseball reference sites for the 1927 Cardinals roster but nothing stood out. I boarded my flight home none the wiser. Later that afternoon, I saw that Mark had replied back: the player was Grover Alexander. When I got home, Isaac was excited to open the box that had arrived earlier and inside, among some great 80’s / 90’s era Cardinals and a Lou Brock pin was a Grover Alexander card. Ernest had included a 1950 Grover Alexander Callahan card (he had to tell me, I have no clue on these things). 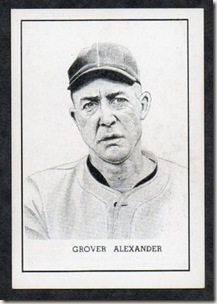 Foot note: Looking through Isaac’s cards, I think the artwork is probably based on the photo from these Conlon cards. The 48 marks above his left shoulder probably correspond to Alexander’s 48 strikeouts in 1927. 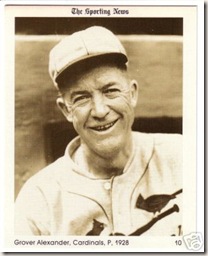 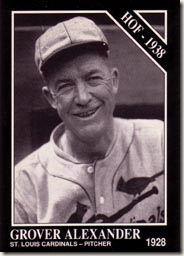 More on baseball related artwork in February and leading up to opening day. Don’t forget to check out Stealing Signs online. Its an amazing series of works and who knows, maybe one you like will be one of the few still available.
Posted by IkesCards at 8:11 PM