Guess what was waiting for Isaac today? That's right, the first of two 2008 Red Hot Rookies: The Rangers' Chris Davis.

I'll say this for Topps support, while they weren't proactive about correcting the wrong email dates they support representative was honest and provided accurate information. He said the email should have said "4 - 6 weeks" and sure enough, this card arrived four weeks to the day.
The card itself is pretty blah. Davis's face is obscured by the helmet and sunglasses. He appeared in 80 games for the Rangers last year yet this picture appears to be from spring training, batting practice, or a minor league game. Topps couldn't get a major league shot for a guy who played half a season in the majors? One last thing, is "Rangers" airbrushed / Photoshop'd on his jersey or is that just me? 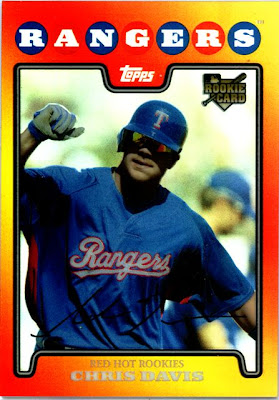 Posted by IkesCards at 4:06 PM